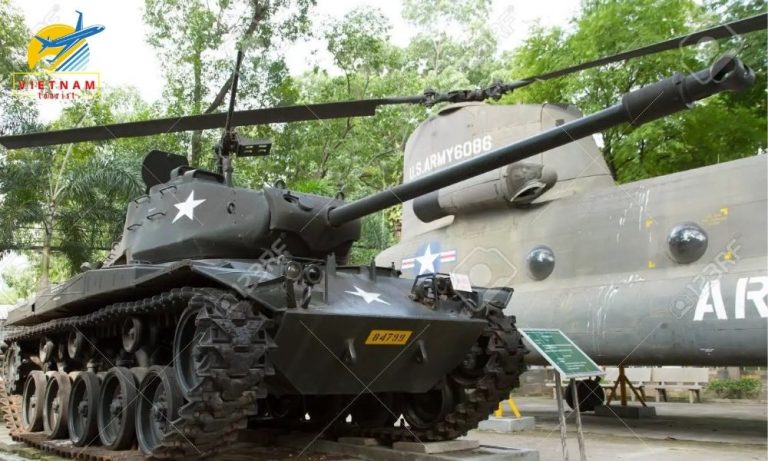 One of Vietnam’s most popular museums is the Vietnamese government-run War Remnants Museum in Ho Chi Minh City, also known as Saigon. According to Christina Schwenkel, who wrote about the museum in her 2009 book “The American War in Contemporary Vietnam: Transnational Remembrance and Representation,” it receives 500,000 visitors per year. Foreign visitors account for two-thirds of all visitors.

The museum’s origins can be traced back to 1975, when it was known as the Exhibition House for US and Puppet Crimes. The name was changed to Exhibition House for Crimes of War and Aggression in 1990, then back to War Remnants Museum in 1995, as relations with the United States improved and the number of American visitors increased, though some complained about the language choice.

Even though its name has been changed, the gallery has been chastised for being unbalanced in its association of American soldiers with aggressive and criminal actions while ignoring atrocities committed on the North Vietnamese side.

Schwenkel wrote that the War Remnants Museum has “pedagogical aims to teach about the ‘crimes’ of US occupation.” Museum curators make concerted efforts to educate foreigners, particularly Americans, about the war, but only from the perspective of a specific government-approved Vietnamese interpretation of events.

Nonetheless, some international visitors recognize the museum for providing a unique perspective on the dispute that they cannot find elsewhere.

Though the museum’s claims that it has made attempts since 1993 to have included knowledge and objects from International sources, many American tourists have proceeded to criticize it as a propagandistic organ. The courtyard below the museum houses captured or neglected American military aircraft, rotorcraft, tanks, and heavy weapons.

According to Schwenkel, one contentious display implying American criminality is an image of a smiling US soldier holding up the severed head of a Viet Cong combatant, with the caption, “After decapitating some guerrillas, a GI enjoyed being photographed with their heads in his hands.” The horrific photos appear to show Americans victimizing dying Vietnamese opponents, with one dead body referred to as a “liberation soldier” in the caption, suggesting that it was his side, not really the Americans, defending freedom.

In accordance with Schwenkel, one of the museum directors stated the importance of educating American visitors about crimes committed by their country’s troops:

Separate rooms depict the Vietnamese as aggressors and perpetrators of war crimes. As according photographer David Coleman, rooms are dedicated to graphic photos depicting the effects of the toxic herbicide Agent Orange, napalm, and undetonated munitions, whereas other sections endure evocative titles including such “Historical Truths” as well as “Aggression and Atrocities.”

Western visitors examine photographs depicting the impacts of Agent Orange on newborns after the war.

Stephanie Yoder recalled the contents of one display for her blog Twenty-Something Travel as “critical words from the Declaration of Independence, thoughtfully positioned next to a picture of an American soldier executing a Viet Cong soldier.” “… What about all the atrocities committed by the Viet Cong? Among the rubble, it was not even mentioned. I see photos of imprisoned Viet Cong, but where is the exhibit on the infamous Hanoi Hilton? Without a doubt, war is hell, but it is a two-sided inferno.”

Yoder remembered one picture caption that said, “Even female and babies are objectives of US American division mopping-up operations.” She also saw for sale a memento mug with a portrait of trying to flee Vietnamese civilians and the phrases, “American soldiers and army personnel of Saigon enforce innocent patrior” (sic). One anti-war poster’s caption reads, “GIs with decapitated Vietnamese revolutionaries,” beneath a photograph of smiling military men, supposedly American, with formless heads aligned across from them.

“It’s another,” one American student said after going to visit Schwenkel. “They will include the wrongs perpetrated by North Vietnam.” Many of my father’s friends were in during the war, but not for that reason.

The museum also includes quotes from American military and political figures criticizing the United States’ role in Vietnam. Coleman wrote on his website, “Much of the text passes firmly into propaganda borders, but it also does with real proof.” “It can’t be dismissed out of hand, but it also couldn’t be accepted as true.” A visitor looks at a photograph of the infamous My Lai extermination of Vietnamese noncombatants by American troops below.

In spite of anti-American rhetoric, the museum doesn’t really glorify North Vietnamese or Viet Cong soldiers who fought against the Americans. Actually , they are briefly mentioned at all.
“Throughout, the ‘nationalists,’ as North Vietnamese sympathisers are referred to, are conspicuously absent,” Coleman wrote. “They are present in spirit throughout the museum, but there is no substantive debate or commemoration of them or their methodologies. They are regarded as stoic rather than heroic, as doing their obligation for the betterment.”

Notwithstanding its partiality, former Marine infantryman Dave Smith argued in Task & Purpose that the museum is valuable for providing a foreign perspective that Americans aren’t normally exposed to. “The museum conveniently omits out the Viet Cong’s own donations to the military conflict,” he wrote, “but it is an outstanding chance to learn about armed conflict from other side.”

According to The New York Times, one example is the popular Requiem exhibit, which features 330 framed war photographs taken by 134 photographers from 11 countries who have been killed on undertaking. It includes photographs taken by North Vietnamese and Viet Cong photojournalists, offering a rare glimpse into that side’s daily life.

“We went expecting nothing, but on its top floor we discovered a hidden treasure,” wrote Donatella Lorch of the Requiem demonstrate in the New York Times. “In these images, the Vietnam War is profoundly mortal and real. It slammed me, took my breath away, and made me realize how much sorrowful war actually involves. I sobbed.”