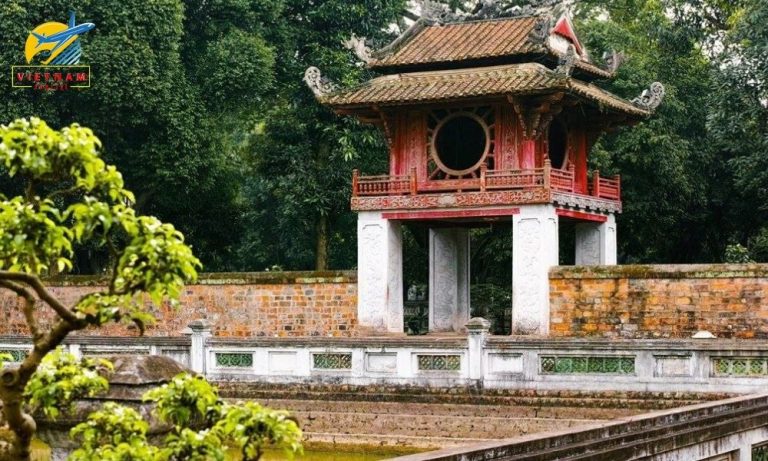 Planning a Vietnam tourism 4 days in Hanoi, Vietnam, and want to see as much as possible? There is so much to see and do in Hanoi and the surrounding area. This Hanoi itinerary will assist you in making the most of your visit.

If you’re going to Vietnam, the thriving city of Hanoi will almost certainly be on your itinerary, and it might even be the starting point for your Asian adventure. In that case, you should make an excellent Hanoi itinerary to kick off your trip in style. After returning from Vietnam, I put together a four-day Hanoi itinerary that I believe ticks all the boxes for those looking to soak up the city’s history, culture, charm, and character.

This Hanoi itinerary has it all, from the universe Ho Chi Minh Mausoleum and the Vietnam War Museum to the breathtaking collection of temples, lakes, markets, and more.

When Is the Best Time to Visit Hanoi?

Hanoi’s climate is a mix of traditional Northern Hemisphere seasons (with varying temperatures throughout the year) and tropical torrential rain more appropriate for its southeast Asian location. As a result, when deciding when is the best time to visit Hanoi, you’ll need to consider your weather priorities.
From February to April, Hanoi’s spring months, with mild temperatures (15-20 degrees Celsius) and frequent drizzle, are ideal for vegetation to bloom. From then on, the summer months of May to August begin to heat up, with temperatures reaching the 30s and sometimes even 40s in July and August!

These months are distinguished by high temperatures and humidity, as well as heavy afternoon rainfall, which can occasionally cause serious flooding.

Temperatures begin to fall again in September, with pleasant 25-degree days and a changing early autumn landscape that makes a stunning backdrop for your trip. Finally, winter in Hanoi lasts from December to January. These months are typically cool but humid, making them unsuitable for travel unless you really want to walk around the city while attempting to avoid the heat.

These months are distinguished by high temperatures and humidity, as well as heavy afternoon rainfall, which can occasionally cause serious flooding.

Temperatures begin to fall again in September, with pleasant 25-degree days and a changing early autumn landscape that makes a stunning backdrop for your trip. Finally, winter in Hanoi lasts from December to January. These months are typically cool but humid, making them unsuitable for travel unless you really want to walk around the city while attempting to avoid the heat.

How to Get to as Well as from the Hanoi Airport

There are several ways to get from Noi Bai HAN Airport to Hanoi city center (and vice versa), with the shuttle being one of the cheapest and easiest options for those staying in the Old Quarter. The airport shuttle service costs around 40,000VND (less than $2/1.50) and should take 45 minutes to an hour depending on the time of day and whether the bus leaves on time!

Shuttles depart from just outside the terminal at the airport, and from the city center, they depart from the Vietnam Airlines Office on Quang Trung near Hoan Kiem Lake. These buses usually leave every hour, but it is possible that the driver will wait until the bus is full before departing. You may be able to walk to your hotel or take a taxi for the final leg, depending on where you are staying in the city.

Conversely, you can take a taxi from the airport to downtown. If you are traveling in a group or know you will be staying outside the city center, this could be a good option. Taxis typically cost between 300,000 and 350,000 VND ($12-15/10-12), so they won’t break the bank. To avoid being ripped off by an unscrupulous taxi driver charging over the odds on his dodgy meter, make sure you take an official green taxi from the airport taxi rank!

Most of Hanoi’s main city attractions are located in the Old and French Quarters, making them easily accessible on foot from your hotel if you stay in a central location. Because there are so many things to see and do, you’ll never have to walk more than half an hour without coming across another sight!

If you want to travel long distances in and around Hanoi, you can take a motor-taxi (called xe om in Vietnamese), a taxi (always try to flag down a green one), or the electric bus, which encompasses the Old Quarter and the area around Hoan Kiem Lake. If you will not want to walk in the Hanoi heat, take a cyclo (similar to a rickshaw), but make sure you agree on a fixed price first.

With most of the city’s transportation options, it’s a good idea to have your location written down in Vietnamese to prevent misunderstandings!

Your day 1 in Hanoi, Vietnam, would be spent in and around the Old Quarter, visiting lakes, temples, and historical sites that will provide you with an understanding of the city’s history and culture. There will be a lot of walking today, so wear comfortable shoes and bring a backpack with your camera, water, and daily essentials!

The Tran Quoc Pagoda, situated on West Lake in the heart of Hanoi, is one of the city’s most iconic landmarks, not least because it is the city’s oldest pagoda. The Tran Quoc Pagoda, which means “protecting the peaceful country,” is a sacred space visited by both locals and tourists who come to admire the beautiful architecture and also the tranquility that it represents within this chaotic city. The site includes a distinctive red stupa, a Bodhi tree donated by the Indian president, smaller temple buildings, and a museum housing crucial antique furniture and monuments.

The Thăng Long Imperial Citadel, a UNESCO World Heritage Site with ancient buildings and ruins, as well as historic artifacts, will also be a highlight of your visit to Hanoi. For roughly 13 centuries, this was the cultural and political heart of the country, and as such, the historic castle is among the most notable and significant sites.

A best place to start your second day in Hanoi is to take a trip the Vietnam Museum of Ethnology, which provides information about Vietnam’s 54 ethnic groups. This is an intriguing museum that uses education and exhibitions to help preserve cultural authenticity. The museum allows you to explore the various styles of architecture of the ethnic groups, learn about the various pastimes, and admire the range of cultural clothing, jewelry, and festival items that distinguish each of these groups.

The Temple of Literature in Hanoi is a must-see for those who prefer culture over history. This temple, built in 1070 as a university, is now a monument to education and literature, with landscaped gardens and courtyards centered on mental clarity and learning, and the names of effective graduate students emblazoned on pile foundations all through the complex.

The art of water puppetry is thought to have originated in rural Vietnam when locals made the decision to entertain themselves by flooding their rice paddy fields. Standard water puppet displays tell stories about everyday life in Vietnam or depict historical legends, with brightness, audio, and motion combining to create an intriguing show of puppets floating across the water.

The Presidential Palace Historical Site (Khu di tch Ph Ch tch) is a yellow, French colonial-style structure that served as President Ho Chi Minh’s residence during the 1950s and 1960s. It has been open to the public as a cultural site since 1977, and tourists can start exploring the accommodation where many political gatherings have taken place.

It’s significant to mention that the Presidential Palace Historical Site is only open in the morning (7.30 a.m.-10.30 a.m. weekdays/7.30 a.m.-11 a.m. weekends and holidays), so plan ahead of time if you want to go inside.

The Hoa Lo Prison Memorial in Hanoi is a symbol of the Vietnamese struggle against French colonists, during which harsh, inhumane punishments were administered and hundreds of sacrifices were made in the hope of achieving national independence. Today, the prison continues to serve as a commemoration and instructional way to remind of the atrocities committed during this period, as well as the tenacity of the Vietnamese people.