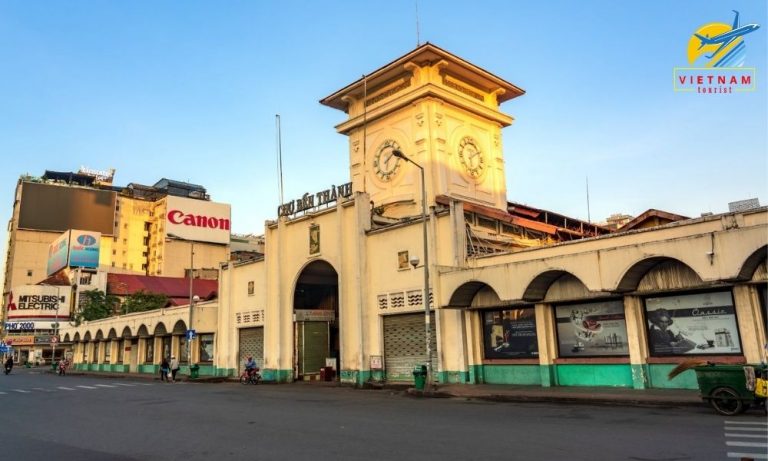 Ho Chi Minh City is the most enormous and commercial city in Vietnam, and it is a place where old and new coexist in stark contrast. In following article, I will talk about favorite places in Ho Chi Minh City.

The Cu Chi Tunnels, located about 60 kilometers from Ho Chi Minh City, are a must-see half-day trip and one of the city’s top tours. During the Vietnam War, this vast 250-kilometer-plus network of tunnels served as the base for the Viet Cong’s military operations. Soldiers used the cramped tunnels for hiding, hospitals, communication bases, supply routes, and even living quarters.

A visit usually offers the ability to crawl through part of the tunnel network, which increases your appreciation for the soldiers’ stamina and adaptability. Even if you do not concern about modern military history, the tunnels provide fascinating insight into the conditions that troops faced during the conflict and the strategies that bolstered the VC’s serious opposition to American forces.

Consider joining a Cu Chi Tunnels & Mekong Delta Full-Day VIP Tour from Ho Chi Minh City to make the most of your visit. This 11-hour tour includes round-trip transfers by VIP limousine or air-conditioned bus, snacks and cold drinks, and a full Vietnamese lunch (with a vegetarian option available). You’ll go to the Cu Chi tunnels, learn about guerrilla welfare and the booby traps used in the tunnels, and then walk right into one of them.

The War Remnants Museum is one of Vietnam’s most famous museums, with harrowing exhibits depicting the horrors of war in this battle-worn country. The museum’s primary focus is the Vietnam War, but some exhibits are related to the first Indochina War with French colonialists.

It’s best to begin on the top floor and work your way down, finishing with the lighter displays on the ground floor.

The majority of the exhibits are photographic images, and some of them are upsetting, particularly the graphic images of child Agent Orange victims. A guillotine and “tiger cages” used for Viet Cong prisoners are among the exhibits.

Many criticize the museum’s approach, but the exhibits vividly depict the brutality of war. The museum also has an interesting exhibit on the work of war photographers from both sides who died during the conflicts.

The Golden Dragon Water Puppet Theatre is ideal for young families and anyone who enjoys light – hearted conventional entertainment. Water puppetry originated in rural Red River Delta villages and has been conducted in Vietnam for over 1,000 years.

The fascinating 50-minute show offers a glimpse into the culture of the country. Although it is presented in Vietnamese, the strength of the puppet protagonists, both human and animal, surpasses the language gap.

Live music complements the experience; talented musicians perform on musical elements such as bamboo flutes and two-stringed violins. The theater is air-conditioned, so expect some graceful splashes if you sit in the front row.

The atmospheric Thiên Hau Temple, built in the nineteenth century, is among the best places to visit in Ho Chi Minh City’s Chinatown (ChoLon) and one of the city’s oldest Chinese temples. This evocative temple, dedicated to the Lady of the Sea, Thiên Hau, is visited by both locals and tourists, and many of the materials used in its construction were brought from China.

As you walk through the green wrought-iron gates and across the small courtyard, clouds of scented billow in the air, candles flicker on altars, and passageways of sunlight pierce through the partial roof. The altar, with monuments of the goddess, and the complicated porcelain backdrops adorning the roof portraying scenes from 19th-century Chinese life can be seen from here.

In her absence, the goddess is said to have left two turtles to guard the temple. On the 23rd day of the third lunar month, a parade in the neighborhood features a figure of Thiên Hau, who is said to save sailors stranded at sea. The temple is free to enter.

While in China Town, check out the bustling Binh Tay Market, which sells everything from fresh produce to Chinese trinkets. There are also some beautiful examples of classical Chinese architecture in the area.

The elegant Saigon Opera House, also recognized as the Municipal Theatre of Ho Chi Minh City, is located at the beginning of the famous tree-lined Le Loi Avenue and is a must-see for architecture enthusiasts, particularly those who appreciate the French colonial style. It was built in 1897 as the Opera de Saigon by French architect Eugene Ferret to enthrall French colonists, and its striking facade echoes the style of the Petit Palais, which was fabricated in Paris the same year.

After 1956, the building housed South Vietnam’s Lower House assembly before reopening as a theater in 1975, following the fall of Saigon. The only way to see the interior of the theater is to buy a ticket to a performance.

Tickets for the Ho Chi Minh City Ballet Symphony Orchestra and Opera are available at the box office or local travel agencies. Some of the city’s new shopping malls and exclusive hotels are located near the opera house. A visit here can also be combined with a visit to the nearby Notre Dame Cathedral and Reunification Palace.

Continue to talk about favorite places in Ho Chi Minh City  visit to the Reunification Palace, formerly known as the Independence Palace, is more about the historic events that occurred here than about any pomp and circumstance. In fact, with its large, airy rooms and dated furnishings, this 1960s-style building appears to have been frozen in time since April 30, 1975, when a North Vietnamese army tank crashed through the iron gates here, effectively ending the Vietnam War. For locals, the palace symbolizes this historical moment and the country’s reunification.

The palace, set on 44 acres of lush lawns and gardens, also provides an intriguing glimpse into the way of life of advantaged heads of state in 1960s Saigon.

When Vietnam was divided into north and south, the current building was completed in 1966 and turned into  the home and workplace of the succeeding president. The president’s living quarters, the war command room with large maps and antiquated communications equipment, and the maze of basement tunnels are all notable features.

Outside, you’ll see military vehicles such as the fighter jet that destroyed the Norodom Palace and tank 843, which rammed through the palace gate more than four decades ago. There are English-guided tours available.

Talk about favorite places in Ho Chi Minh City, must mention to Ben Thanh Market and Sai Gon Square. The hot and chaotic Ben Thanh Market is almost an obligatory stop for tourists, even if only to witness the crammed stalls and market chaos. Everything from local delicacies, fish, flowers, and tropical fruits to shoes, clothes, colorful candy, and souvenirs is piled high in the stalls. Pickpockets are also common in markets, so keep any valuables secure and out of sight.

After soaking in the atmosphere, take a three-minute stroll to Saigon Square for a mildly less frenetic buying experience with the added benefit of air conditioning. From garments and backpacks to jewelry and shoes, you’ll find great deals here. Both locations are used to haggling.