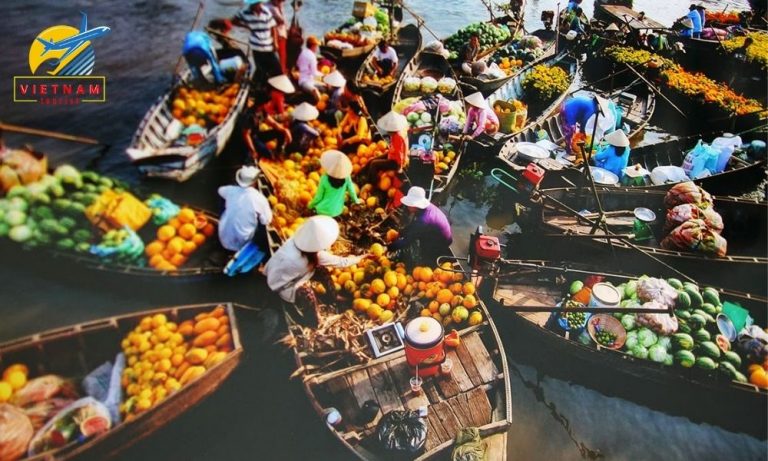 Introduce tourist attractions in Vietnam: are astounding; this enthralling country is endowed with breathtaking natural beauty, an unfathomable number of World Heritage Sites, historical legacies ranging from 10th-century pagodas to wartime tunnels, vibrant cities disclosing multi-national beautiful architecture, and rich cultural diversity. One trip may not be enough, but for first-timers, whether honeymooners or adventure seekers, here’s our list of things to see and do in Vietnam.

The utterly charming Ancient Town of Hoi An is one of Vietnam’s top attractions, in spite of the crowds, it hasn’t lost its allure. FroBetween the 16th and the 19th centuries, this compact enclave was a thriving Silk Road trading port, centrally located in Hoi An town, alongside the picturesque Thu Bon River. Today, the Ancient Town is one of Southeast Asia’s oldest towns and a UNESCO World Heritage Site, with atmospheric narrow streets lined with centuries-old cultural treasures, historic sites, and quaint buildings, a hybrid of the port’s multi-national architectural legacies.

Applaud the Chinese shophouses and opulent assembly halls, as well as the iconic Japanese Covered Bridge and faded French colonial-era mansions. This historic district is also home to a vibrant local community, with markets, artisan master classes, and riverside accessible cafés and restaurants ideal for sampling local cuisine. After dark, the Ancient Town comes alive, particularly during the month – to – month full moon lantern festival, when traffic-free roads are activated solely by hundreds of colorful textiles lanterns and vivid with conventional festivities.

Visit the My Son Cham towers, located southwest of Hoi An. This World Heritage Site is not only one of Vietnam’s most striking examples of its ancient Champa Kingdom, but it is also one of Southeast Asia’s most important archaeological sites and a leading Hindu temple complex.This evocative Cham temple sanctuary, set in a narrow wooded valley surrounded by forested mountains, was once an essential political and spiritual center and royal burial site of the former Champa civilization, built from the 4th to 14th centuries.

My Son had been forgotten for centuries before being recaptured by French anthropologists in 1898. The central complex has been blighted by time, with the vast bulk of the damage occurring during the Vietnam War; however, the majority of the central complicated survived the bombs, and some components are being restored. The sanctuary is dedicated to Hindu Gods and consists of more than 70 red brick and sandstone temples arranged in clusters, each with striking decorative carvings, stellate, sculptures, and writings.

My Son is still impressive today, despite being in various states of ruin, repair, and vegetation overgrowth, with around 20 temple constructions still standing. There’s also an interesting exhibition on-site; go early in the morning to avoid the tour groups and heat.

In Ho Chi Minh City, wartime legacies are prominent attractions, and these two museums are the most popular, equally fascinating, and a must-do experience. The enforcing Independence Palace (or Reunification Palace) holds significant symbolic importance in the history of the country. Formerly the South Vietnamese government’s headquarters and official presidential residence, this is where North Vietnamese Army tanks crashed through the main gates on April 30, 1975, marking the beginning of Reunification.

This landmark monolith building, now a ‘National Cultural and Historical Relic,’ museum, and VIP function space, stands frozen in time from that fateful day. Take a guided tour through five floors and rooms preserved in a time warp from the 1960s and 1970s, with highlights including the bomb-proof basement, with secret tunnels and a war command room, a kitschy cinema and casino, and glittering reception halls.

Despite being somber and heartbreaking, the War Remnants Museum is the city’s most-visited museum, with a series of exhibition rooms that vividly depict the horrors and futility of war – (both the Vietnam and Indochina wars). Graphic photojournalism, notorious ‘tiger cages,’ and chemical defoliant legacies are among the shocking exhibits, while the outer courtyard is littered with wartime fighter planes, tanks, and bomb varieties.

The Cu Chi Tunnels, located north of Greater Ho Chi Minh City, offer a more interactive historical experience for visitors of all ages (although claustrophobics should perhaps miss this one).

This vast network of trying to connect underground tunnels stretching for more than 100 miles towards former Saigon served as the Viet Cong’s secret headquarters during the Vietnam and Indochina wars. The Cu Chi Tunnels were of enormous strategic value and played a significant role in Northern Vietnam’s victory, which is regarded as among their greatest wartime accomplishments.

These legendary tunnels have been maintained and turned into a memorial site park and a popular tourist attraction. Tourists can enter two short segments of the original tunnel network, which have been regained, slightly widened, and cemented, at either Ben Dinh or Ben Duoc villages. Crawl through the deep tunnels with guides to get a sense of what circumstances were like and to see erstwhile subterranean facilities such as the conference rooms.

Above-ground destinations include a shooting range, a display of mantraps and burned-out tanks, and a restaurant serving simple meals similar to those eaten by soldiers. Some half-day tours include speedboat transportation along the river for a portion of the journey.

The southern Mekong Delta is Vietnam’s most agriculturally productive area, with a lush landscape of rice paddies, banana, sugarcane, and coconut plantations, tropical fruit orchards, and more. Visiting the Mekong Delta is an absolute must when going to visit Vietnam.

This verdant, flat ‘Delta is also dominated by – and heavily reliant on – the Mekong River, which subdivides out into a system of rivers and streams and waterways that serves as the primary mode of transportation for many. This could explain why floating markets have been a way of life and trade in this region for well over a century.

In spie of recent developments, the ‘Delta’s floating markets are declining, but many continue to operate in strategic locations; for visitors, this is an iconic Vietnamese sight and a fantastic opportunity to engage with locals and experience a customary southern culture – not to mention a fantastic photographic opportunity. Take an early morning guided tour on a small boat, weaving in and out of dozens of vibrantly colored barges piled high with fresh foods and household items, and order Vietnamese breakfast and coffee from floating kitchens! The largest and most well-known floating markets are Phong Dien and Phung Hiep, but especially Cai Be and Cai Rang, which are known for their lively atmosphere.

Hue, in the Central Provinces, was Vietnam’s imperial capital between 1802 and 1945, the seat of a Nguyen Emperor dynasty and the nation’s political, cultural, and religious center. All of these imperial legacies, a collection of relatively well-preserved historical buildings, royal court traditions, and relics of great historical and cultural significance, have now been designated as a UNESCO World Cultural Heritage Site, or ‘Complex of Hue Monuments.’

The majestic 19th century Imperial Citadel, a spacious walled complex containing the Imperial Enclosure, Forbidden Purple City, palaces, temples, gates, and much more, is Hue’s crown jewel. Even though much of the city was destroyed during the Vietnam War, many parts have been restored and are worth seeing, such as the Flag Tower, Ngo Mon Gate, and Thai Hoa Palace. Other highlights include several Mandarin Garden Houses and the magnificent Emperor’s royal mausoleums, which are hidden among the valley area and low-lying hills. The most historic of Hue’s numerous exquisite pagodas is the seven-tiered, 17th century Thien Mu Pagoda. Hue’s delectable imperial cuisine is also devolved from the royal palace!