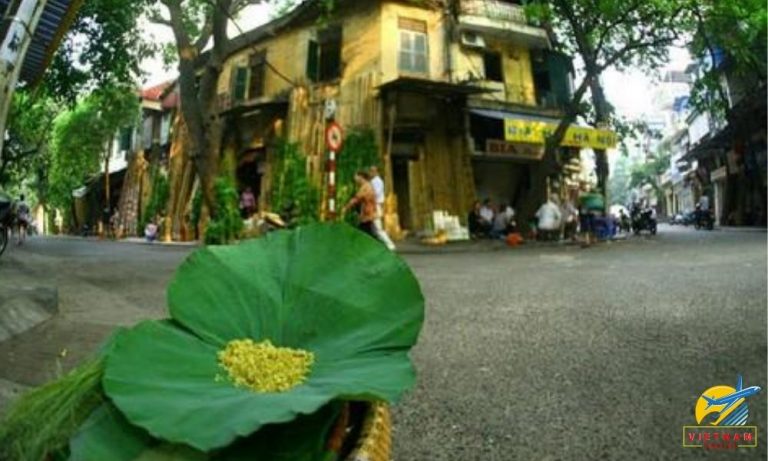 In spite of Hanoi, the Vietnamese capital, is one of the busiest cities in the country (along with Ho Chi Minh City, Da Nang, and Nha Trang), it has its own charm that you may miss if you only spend one or two days there. To get off the beaten path in the 1,000-year-old city, discover its cultural relics, or have direct conversations with the locals, enjoy Hanoi travel 7 days here and follow a Hanoian itinerary to learn about the best things to do in Hanoi.

After you arrive in Hanoi, rest at your hotel to recover from the long flight. When the sun goes down, it’s time to explore the fascinating nightlife of this historic city. On weekends, instead of going to a bar, pub, or for a beer, it is recommended to take an entertaining walk around on Hoan Kiem Lake and the distinctive walking street.

At night, Hoan Kiem Lake sparkles with a red bridge connecting a green lake bank with a small temple, a colorful tower, and a lotus-like yellow temple in the middle of the calm lake reflecting everything around. Simply walk around this tranquil lake and listen to the legend of returning a Vietnamese King’s sword to a…Golden Turtle God.

From 6 p.m. on Friday night until 12 p.m. on Sunday, a pedestrian-only route stretched from Hoan Kiem Lake’s bank to 36 streets in Hanoi’s Old Quarter. Traditional games, street art, and Vietnamese cultural performances are held at every corner of this vast walking area… for free.

Try to involve yourself in the large group of Vietnamese people ranging from children to the elderly, stop by a coffee or tea street vendor, eat food you may have never heard of, or simply watch people move and feel the heartbeat of Hanoi. It’s a fantastic start for anyone who has only just arrived in this city.

On the second day, travel back in time to Hanoi from the 10th to the 20th centuries. Hanoi’s history can be traced back to the Ly Dynasty and a renowned king, Ly Cong Uan, who established Hanoi (then known as Thang Long, which means Rising Dragon) as the capital of ancient Vietnam. Throughout its 10 centuries of ups and downs, Hanoi has become home to a plethora of historical sites ranging from ancient temples and pagodas to colonial-style buildings and hundreds-year-old walls. Join Asianway Travel on a minivan tour to explore each location one by one.

Van Mieu, also known as the Temple of Literature, was built in 1070 and became a sanctuary for Confucians, sages, and mandarin-choosing exams. The temple was rebuilt during the Tran Dynasty, but the pagodas, lotus ponds, and gardens of the five courtyards remain unchanged from ten centuries ago.

The largest square in Vietnam, Ba Dinh Square, is regarded as a symbol of Vietnam’s independence and the August Revolution of 1945. The museum dedicated to Uncle Ho’s life, as well as the simple cottage where he lived and worked, and also his “house on stilts” and final resting place, are both listed as must-see attractions in Hanoi. Aside from the Ho Chi Minh Mausoleum, visit Hanoi’s famous One-Pillar Pagoda, which was built in 1049 to resemble a lotus blossom.

The next stop is the American Army’s “Hanoi Hilton” during the Vietnam War. It is a museum housed within the former Hoa Lo Prison, where Senator John McCain and Douglas “Pete” Wilson were imprisoned.

Continue on to the Hanoi Opera House to appreciate the French-style theatre that has survived more than a century of history while retaining all of its original charm. Then, to cap off the second day, enjoy a romantic dinner and a cup of coffee at Sofitel Legend Metropole’s outdoor Paris-inspired Cafe.

This day is entirely dedicated to discovering Hanoi’s soul- 36 streets- one of the most fascinating things to do in Hanoi. Actually, there are over 70 streets in this area, and “36 streets” is an old name that emerged in the 13th century when handicraft developed in ancient Vietnam and craft workers from nearby villages came to trade their goods, then lived right within the Old Quarter and generated these streets.

It is recommended to visit such unique places as:

For more than a millennium, Hanoi has been the center of Vietnamese handicraft, with numerous handicraft villages nearby. Follow us on the fourth day in this city to Bat Trang, one of Vietnam’s most best known pottery-making villages. After spending the day at Bat Trang, return to Hanoi center to see the Water Puppet Show.

Day 5: Arts and Culture in Hanoi

Today, let’s go to some interesting museums to learn more about the culture and art of Vietnam, and especially Hanoi.

It’s a good way to start the day with both outdoor and indoor displays. It demonstrates the diversity of Vietnamese culture as reflected in the differences in clothing, houses, rituals, farming methods, kitchenware, and so on of each ethnic group in Vietnam (54 in total). If you’re traveling with your family, don’t miss its playground, which has traditional games that you and your kids may have never played before.

There is a wonderful collection of Vietnamese female traditional clothing from various ethnic minority groups in Vietnam, as well as propaganda posters highlighting the role of Vietnamese women in the country’s development.

It is a treasure trove of art collections ranging from Cham stone carvings to lacquered statues or effigies of Buddhist monks and Buddha, contemporary art, and folk-naive paintings. Visit this museum to be immersed in the world of beauty and creativity of Vietnamese artists from ancient times to the present.

Day 6 and 7: Venture Off the Beaten Path.

Let’s leave Hanoi’s bustling center and escape to a natural area nearby to breathe fresh air, admire North Vietnam’s stunning landscapes, and meet friendly locals. There are several magnificent destinations like that, but three of the most impressive are listed below:

Ha Long Bay: For those who enjoy beach activities, kayaking, cave exploration, and cruising through a breathtaking bay surrounded by limestone islands and islets.
Ninh Binh will appeal to those who enjoy history, ancient monuments, peaceful ricefields, and a green river flowing through limestone cliffs.
Sapa: For adventurers who crave trekking through hill tribe villages, admiring magical rice terraces, and taking on Indochina’s highest mountain peak.