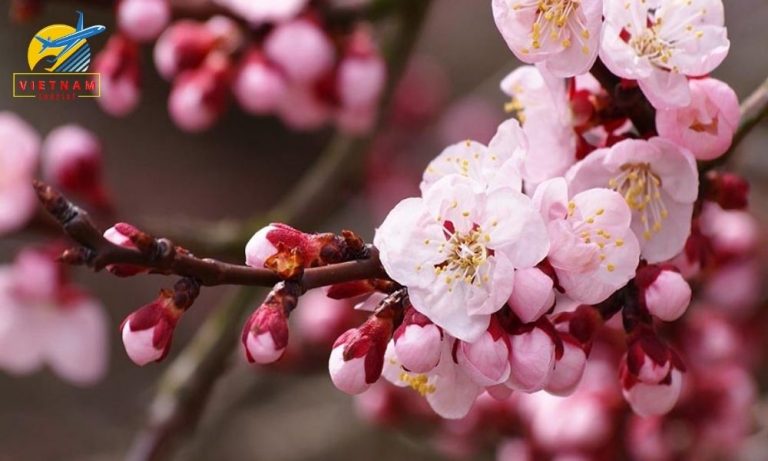 Tet Nguyen Dan, or Tet, is Vietnam’s most influential and vital celebration and festival. It is the New Year of Vietnam, which marks the coming of spring according to the Lunar calendar, which is a lunisolar calendar. Tet Nguyen Dan is Sino-Vietnamese for the Feast of the First Morning. The writing below will describe Tet festival in Vietnam.

Tet is celebrated from the first day of the first lunar month (around late January or early February) till at least the third day. Many Vietnamese people prepare for Tet by preparing special holiday foods and mopping their homes. During Tet, many customs are observed, such as visiting someone’s home during the first day of the new year (xong nha), ancestor worship, wishing New Year’s greetings, offering lucky money to children and old people, as well as  opening a shop.

Tet is also a time for pilgrims and family gatherings. During Tet, Vietnamese people visit relatives and temples, forgetting their problems from the previous year and hoping for a better year ahead. Tet is celebrated as the first day of spring, and the festival is also known as Hi xuân (spring festival).

Vietnamese, like some other Asian nations, believe that the colors red and yellow bring good luck, which may demonstrate why these colors are seen everywhere during Lunar New Year. People believe that what they do on Tet will determine their fate for the entire year, so they always keep smiling and react as nicely as they can in the hope of future year.

During Tet, most Vietnamese people return to their families. Some return to their homeland to worship at the family altar or to visit the graves of their forefathers. Despite the fact that Tet is a national holiday for all Vietnamese, each province and religion has its own traditions.

Tet is divided into three periods in the three Vietnamese regions: Tt Niên (Before New Year’s Eve), Giao Tha (New Year’s Eve), and Tân Niên (the New Year), which represent the preparedness before Tet, the eve of Tet, and the days of and following Tet, respectively. All of these traditions are used to commemorate Tet in Vietnam.

Prior to New Year’s Eve

This period begins about a week or two before the overall celebration. The overall atmosphere immediately prior to Tet is one of frantic shopping, home decorating, traditional Tet cooking, and going to wait for family members to return home. People attempt to repay the loans ahead of time in order to be debt-free on Tet. Mom and dad buy new clothes for their offsprings so that they will be ready for Tet.

The streets and markets are packed in the days leading up to Tet. Because stores will be closed during Tet, everyone is out shopping for food, clothes, and house decorations.

The altar is thoroughly cleaned during Tet, and new offerings are placed there. Traditionally, the three kitchen guardians for each house (ng Táo) (Kitchen God) return to paradise on the 23rd day of the twelfth lunar month to give the Jade Emperor his annual report on family members. A simple ceremony marks their departure, during which the family appears to offer ultimate sacrifice for them to use on their journey.

Each family prepares special holiday foods such as bánh chng and bánh dy in the days leading up to Tet. These foods require extensive preparatory work. Family members frequently take turns keeping watch over the fire up over night, telling each other stories from previous Tets. Mut (candied fruits), a famous traditional food in Tet, is functioned as a snack to welcome guests going to visit the house and is always kept in gorgeous packages and positioned at the table in the living room.

The first day of Tet is set aside for nuclear families. Children put on their new clothes and greet their elders with traditional Tet greetings before receiving the lucky money from them.

Song lâu tram tuoi (long life of 100 years): a phrase used by children to refer to elders. On Tet, everyone is one year older, so children would wish their grandparents good health and longevity.

During Tet, every house is typically decorated with Apricot blossoms (in central and southern Vietnam) or peach flowers (in the North). During Tet, the kumquat tree is a popular living room decoration in the north or central. Its many fruits represent the family’s hopes for fertility and fruitfulness in the coming year.

ln short, Tet is approaching, so if you really want to undergo this extremely special event at least once in your life, pack your bags and book a Lunar New Year trip to Vietnam!