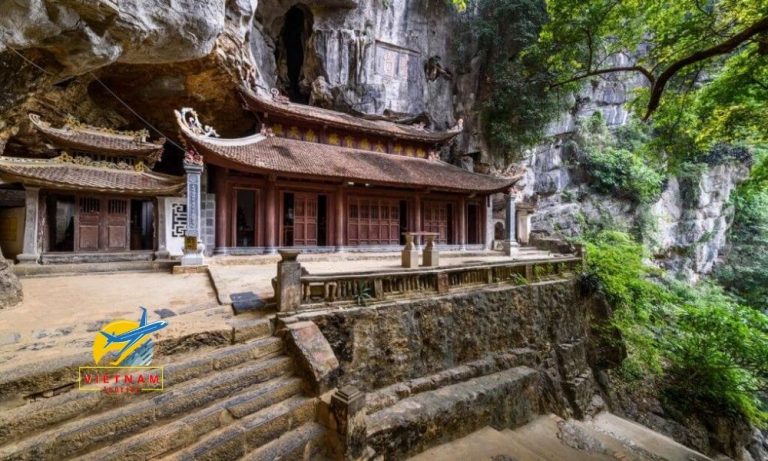 The Bich Dong pagoda is one of Ninh Binh’s most beautiful landmarks. It is also known as the Southern’s second most beautiful cave, after Huong Tich cave in Ha Tay.

The Truong Yen mountains, Ninh Hai commune, Hoa Lu district, Ninh Binh province, are home to the Bich Dong pagoda. The pagoda was constructed in the style of “,” which means “three” in Chinese. It consists of three separate pagodas that lean on the mountain from the bottom to the top: the Bottom Pagoda, the Middle Pagoda, and the Top Pagoda. The Bottom Pagoda consists of 5 rooms with massive wooden and stone pillars. The pagoda honors Buddha and three masters: Chi Kien, Chi The, and Chi Tam, who founded and built Bich Dong Pagoda. The two statues outside are Nam Tao and Bac Dau, who are in charge of the birth and death books. A large stone stele commemorates the names of those who contributed to the construction of the Bich Dong Pagoda.

You must ascend 120 steps from the Bottom Pagoda to reach the Middle Pagoda and the path to the Dark Cave. In front of the cave is an ancient bell with delicate carvings. Tourists also frequently visit the “Giai Oan” bridge, which means “clear someone’s faults,” to unwind.

The Top Pagoda, located at the peak of the mountain, worships the Bodhisattva. From the top of the pagoda, you can see five mountains that adorn the Bich Dong Pagoda and resemble the five lotus petals of the Bodhisattva: Tam Sang, Gia Dinh, Con Lon, Dau Cau, and Hang Dua. The top pagoda has two shrines on either side: Tho Dia on the right and Duc Son Than on the left. The “Cam Lo water tank” of Bodhisattva is located next to the pagoda.

In the early 18th century, two monks named Tri Kien and Tri The built the pagoda. It consists of three pagodas with traditional wood and stone architecture due to the style at the time when the Le Dynasty was coming to an end and the Nguyen Dynasty was beginning. They were given their names after their locations on Bich Dong Mountain. The Ha Pagoda (Lower Pagoda) is located at the mountain’s base. Trung Pagoda (Middle Pagoda) is built into the mountainside, while Thuong Pagoda (Upper Pagoda) is built on top.

Bich Dong Pagoda is a one-of-a-kind combination of ancient pagodas with cross-covered roofs, natural caves, and majestic mountains, among other things, hidden in the green of tropical forests. They all contribute to the breathtaking panorama known as “Bich son bat canh” (An astonishing place gathers enough eight beauties of the country).

The floor plan of the pagoda is based on a Chinese word – “Dinh” (). It has 5 rooms and a 2-story roof with 8 smaller roofs, with 6 stone steps constructing its broad eaves. The Ha pagoda’s fence and two gables were all made of stones. Its upper temple was constructed with stone pillars.

Trung Pagoda, like Ha Pagoda, has a “Dinh” () floor shape. It has a two-story roof, a three-room upper temple, and a forecourt facing west. The combination of traditional Vietnamese pagoda architecture, such as the tiled roof or walls covering the cliffs, and the mysterious space inside a mountain cave, distinguishes the pagoda.

To reach the Upper Pagoda, visitors must pass through Blue Cave or Dark Cave, both of which have 40 stone steps on the mountainside. A breathtaking view of impressive limestone ridges scattered with peaceful villages and a refreshing ambiance awaits you along the short journey.