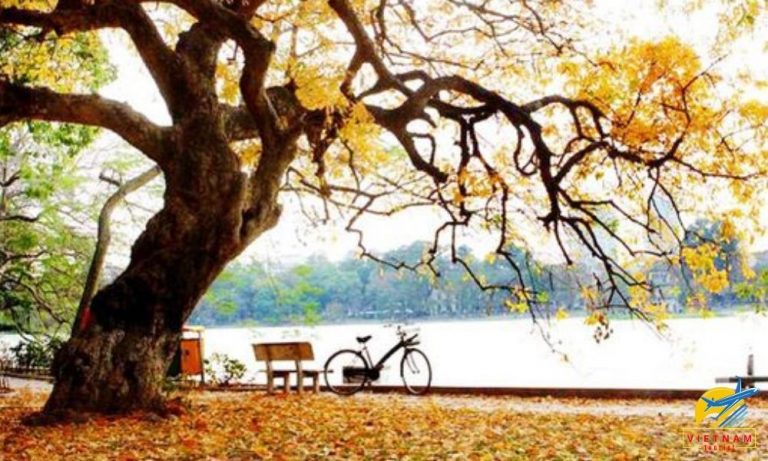 When is The Best time To Travel Hanoi?

The peak seasons, from February to April, and the fall season, from October to November, are considered to be the best times to visit Hanoi.

From February to April, the city is not too hot, and exploring the city’s many beautiful tourist sites is simple. The chill is starting to give way to a mild, pleasant dry climate by the end of February. The average temperature ranges between 15-20 degrees Celsius, and it is also the ideal time for fields and plants to bloom, resulting in stunning rural and natural landscapes.

Tourists and locals alike are looking forward to October. The constant rains during the summer months of May to September make this one of the best times to visit Hanoi. The average temperature is around 25 degrees, and the combination of cold air and warm sun creates ideal weather — the landscape changes to yellow and golden hues that are beautifully dispersed throughout the terrain. Bright blue skies accompany the arrival of autumn.

Off Season in Hanoi

Summer months (May-September), which are also Hanoi’s official monsoon months, and winter months (December-January) are regarded as off seasons for visitors. Summers are hot and humid, with temperatures floating around 33 degrees. During the summer, heavy rains are common, ranging from light drizzles to thunderstorms. Summers are not the best time to travel Hanoi  due to the high humidity and precipitation. Nevertheless, it is an outstanding time to visit air-conditioned malls, enroll in cooking classes, or swim in the pool.

Temperatures can drop to 10 degrees Celsius in the winter months of December and January. Winter temperatures give way to sunny, warm weather similar to that found in many Southeast Asian cities.

In that regard, Hanoi is unique because its winters can be bitterly cold. The cold is exacerbated by high humidity and windy conditions. The daytime temperature may reach 20 degrees, so dressing warmly is essential. Winters are far more manageable than summers and attract a greater number of tourists. The winter holiday season is extremely busy, so making reservations in advance is advised.

The main highlights of Hanoi’s spring season are cold temperatures and light precipitation. After a cold January, temperatures begin to rise in February. The temperature in February is around 18 degrees Celsius with clear skies, though humidity levels can reach 70 percent. The months of March and April are ideal for visiting Hanoi, with temperatures ranging from 20 to 24 degrees. The clear skies and mild temperatures are definitely worth a visit Hanoi’s many attractions on foot. Visit Hoan Kiem Lake or the One Pillar Pagoda, as well as feast on some of Hanoi’s most delectable dishes, such as Pho, Bun Cha, and Xoi.

Spring is also festival season in Hanoi. The most important festival and celebration in the city is the Tet Festival. The Tet Nguyen Dan festival, also known as the Tet festival, is usually held at the end of January or early-mid February. The city is gaining popularity thanks to colorful cultural outpourings.

The roads are designed and lit up, and the residents are dressed to the nines. Numerous hotels & resorts as well host special celebrations. However, the Tet holidays may mean that most accommodations and modes of transportation are fully booked, and some attractions, like a few exhibitions and shops, may remain closed.

The Co Loa Festival in February is recognized for wrestling and crossbow shootings, meanwhile the Dong Festival in March in Hanoi’s Gia Lam district features special martial arts performances by famous masters. Another popular festival, the Le Mat Festival, is held in March and is held in the Hanoi district of Le Mat Village. The Keo Pagoda Festival is held twice a year, in spring and autumn, and includes a palanquin procession, a swimming race, and traditional dances.

Hanoi’s summer and monsoon seasons are hot, oppressive, and wet. Thunderstorms and light drizzles continue for several hours. This makes venturing out and exploring the cityscapes even more difficult. However, May is still not as hot as the other summer months. In May, the temperature is around 28 degrees Celsius, and the skies are still mostly clear.

Summer, on the other hand, begins in full force with the arrival of June, with temperatures ranging from 29 to 33 degrees Celsius. In the summer, high temperatures can reach 40 degrees. June is usually the hottest month, as well as the month when the rains begin. Maximum rainfall occurs in July and August, and can reach 200mm or more.

In July and August, the average temperature is around 29 degrees. The temperature drops slightly in September, averaging 27 degrees, and rainfall totals slightly more than 150mm. Nevertheless, the humidity remains high throughout the summer, exceeding 75%. Summers in Hanoi are regarded the offseason due to high temperatures combined with rain.

The most famous festival of the season, however, is the fun-filled Mid-Autumn Festival held in September. Hanoi’s lakes are particularly beautiful and crowded with locals and tourists, as lanterns soar into the sky and puppet shows, lion dances, and exhilarating food stalls fill the ground.

Hanoi in the Fall (October-November)

The most popular months to visit Hanoi are October and November, which have beautiful weather and bright sunshine. In the fall, temperatures range from 24-27 degrees, with rainfall of less than 100mm and clear blue skies. Although some leaves wither, there are a wide range of flowers that bloom in the fall.

Hanoi can get quite cold in the winter. Warm clothes and jackets are essential items to have in one’s wardrobe if one plans to go out. Temperatures average 17 degrees Fahrenheit but can drop to less than 10 degrees.
The low temperatures are accompanied by strong winds and high humidity, making it feel a far colder than it is.

Furthermore, many structures lack heating and insulation. There is very little rain, with an average of less than 50mm. Typically, the skies are cloudy and the weather is foggy. The holiday season, along with events and festivals, is reason enough to visit Hanoi during the winter. It is also a good time to eat warm street foods while relaxing in the cold.

A hot cup coffee with noodles is ideal for a chilly evening. On Christmas Eve, visit the Hanoi Cathedral or shop at the Old Quarters Christmas market. The Annual Flower Festival, which takes place in the last week of December, is something to look forward to. Depending on the lunar calendar, the Tet Festival may fall at the end of January. As a result, it is best to double-check the festival dates ahead of time.