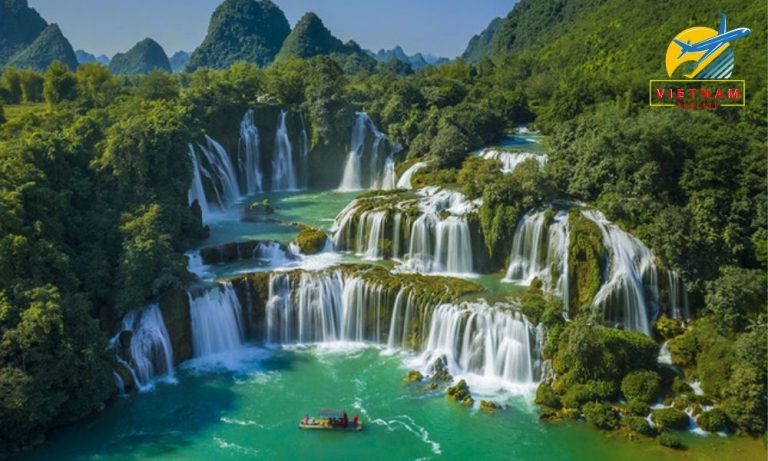 Vietnam is recognized for its breathtaking beauty, as it is home to some of the world’s most amazingly beautiful wonders.

Vietnam is a scenic paradise, with misty mountains, gleaming rice fields, and captivating waterfalls in the north and clumpy white sand and turquoise waters on the south’s beaches.

Below are 5 beautiful places in Vietnam visitors should go and enjoy.

The small French hill station of Sapa, hidden in the clouds among the soaring Tonkinese Alps, serves as a gateway to one of Southeast Asia’s most exquisite regions.

As you break through the misty fog, you’ll see the rolling green Hoàng Liên Son Mountains plunge into the Muong Hoa Valley, which is covered in a patchwork of gleaming emerald rice terraces.

We recommend a 3-day trek between the rural communities to take in the breathtaking scenery and learn about the cultural identity of the H’mong and Dao hill tribes. If trekking is not an option, you can still visit the most beautiful places by taking day trips in a vehicle.

When Should You Go To Sapa?

Sapa’s climate is best from March to May and September to November, when it is located in the remote northwest of Vietnam, with sunshine hours and clear blue skies. The rice terraces are also greatest seen in September and October, when they bloom in a lively green after the rainfall.

How to Get to Sapa

Because there are no airlines to Sapa, the best option is to take an overnight train starts from Hanoi.

Many people consider a nighttime cruise through Ha Long Bay on a conventional junk boat to be the highpoint of their Vietnam vacation. As you float along the gentle waters, you’ll see unearthly landscapes as you pass floating settlements like Cua Van, Vung Vieng, and Cong Dam.

Swim in the calm, clear waters or go kayaking through the breathtaking caves and karsts – it’s the ultimate way to explore one of Vietnam’s most beautiful places.

When Is The Best Time To Visit Ha Long Bay?

For the best weather and temperatures, visit Ha Long Bay in the spring (March and April) and autumn (September and October).

How to Go to Ha Long Bay

Ha Long Bay, located in northeastern Vietnam, is a four-hour drive from Hanoi and is easily accessible by personal cars or coach tour.

Spend a few nights on Cat Ba Island, a beautiful island near Ha Long Bay. The high – density jungle of Cat Ba National Park, a UNESCO World Biosphere Reserve, covers half of the island, while another half is littered with primitive caves, historical places, and golden beaches encircled by pebbly karsts. You can start exploring Ha Long Bay by boating or kayaking from the mainland.

The Detian Waterfall (Virtuous Heaven Waterfall) is one of the most beautiful waterfalls on the planet, cascading down three tiers and surrounded by enchanting karst peaks.

The Ban Gioc Waterfall, which means “half-way across” in Vietnamese, is located on the border between China and Vietnam, making it the world’s second largest multinational waterfall.

The Detian Waterfall is truly awe-inspiring, measuring over 200 metres wide and dropping more than 70 metres, and you can hear its thundering cascades before it even comes into view. Take a bamboo lifeboat around the foundation of the tumbles for a memorable up-close experience.

The Ban Gioc Waterfall (Virtuous Heaven Waterfall) is one of the most beautiful waterfalls on the planet, cascading down three tiers and surrounded by enchanting karst peaks.

The Ban Gioc Waterfall, which means “half-way across” in Vietnamese, is located on the border between China and Vietnam, making it the world’s second largest multinational waterfall.

The Ban Gioc Waterfall is truly awe-inspiring, measuring over 200 metres wide and dropping more than 70 metres, and you can hear its thundering cascades before it even comes into view. Take a bamboo lifeboat around the foundation of the tumbles for a memorable up-close experience.

When Should You Go to Ban Gioc Waterfall?

This amazing natural feat changes with the seasons, with bright red blossoms in spring and golden leaves in autumn. The best time to visit is from April to November, when the spirals are at their most powerful during the summer rains.

How to Get to the Ban Gioc Waterfall?

A scenic 6-hour drive along the highway between Hanoi and Cao Bang city will take you to the Vietnamese side of the falls. You’ll need to drive another 2-hours from Cao Bang to reach this magnificent waterfall.

Ninh Binh province, known as the “Ha Long Bay of the Land,” encompasses a region of breathtaking natural beauty. While hundreds of limestone karsts covered in dense jungle shoot into the sky, luminous green rice fields sculpt around the curving Ngo Dong River.

There will be plenty to see and do, such as ancient caves, gorgeous buddhist temples, Van Long Nature Reserve, and Cuc Phung National Park, Vietnam’s most ancient national park with outstanding hiking trails.

When Is the Best Time to Visit Ninh Binh?

The best time to visit Ninh Binh is from late May to early July, and from September to October, when local farmers harvest rice.

It should be noted that rice harvesting is completed during the dry season (November to March), leaving the fields muddy yellow. The landscapes are still impressive despite the lack of greenery.

How to Visit Ninh Binh?

Ninh Binh is less than two hours by private vehicle from Hanoi and about three hours from Ha Long Bay.

Stay in Ninh Binh for at least one or two nights to fully appreciate this magnificent region. Trang An, a stunning mountain and cave complex, and Tam Coc, a more popular landscape of caves, rivers, rice fields, and pagodas, are both best visited early in the morning to avoid crowds.

Ha Giang is a quiet riverside province in northern Vietnam, bordering China and known for its magnificent landscapes.

Dong Van Karst Plateau Geopark, a fantastic preservation and geological area that is part of the UNESCO Global Geoparks Network, is also located in Ha Giang.

When Is the Best Time to Visit Ha Giang?

Ha Giang is a year-round destination, but the best months to visit are September to November and March to May. The parched season prolongs from December to February, whereas the hot, annual rainfall lasts from April to October.

How to Get to Ha Giang?

The quickest way to get to Ha Giang is to take a six-hour personal vehicle ride from Hanoi.

Above are 5  beautiful places in Vietnam tourists should not miss wwhen take a journey in there. Wish all tourists shall have an ideal trip in Vietnam in particular and other countries in the world in general.