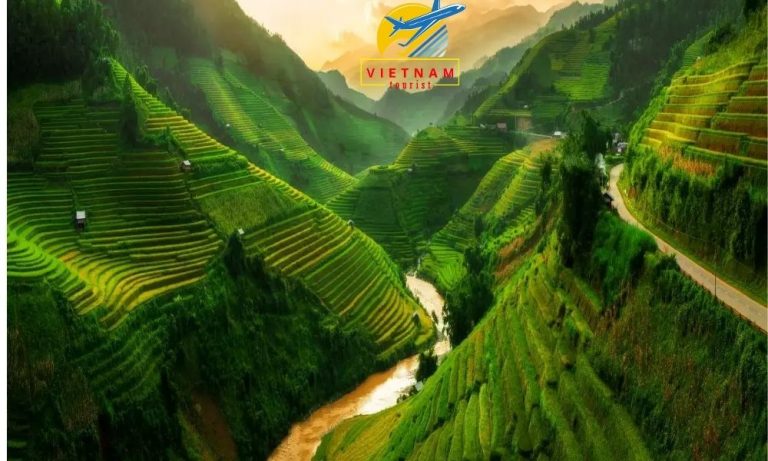 Vietnam was given its name in 1803 by envoys from the newly established Nguyen dynasty who traveled to Beijing to establish diplomatic relations with the Chinese court. The new emperor had given his kingdom the name Nam Viet. He derived the term Viet from the traditional name for the Vietnamese imperial domain and people in what is now northern and central Vietnam. Nam (south) had been added to acknowledge the dynasty’s expansion into southern lands. The Chinese objected to the new name because it was similar to that of an ancient state that had revolted against Chinese rules.

The origin of Vietnam’s name captures several major themes that have run throughout the country’s history. As the word Viet suggests, the Vietnam culture and society is unique. However, as the inclusion of Nam demonstrates, the land they inhabit has grown over time and has internal divisions into northern, central, and southern regions. Furthermore, as evidenced by the name change, their history has been profoundly influenced by contact with otherfrequently more powerful, groups.

Vietnam is currently at a crossroads. It has been at peace for more than a decade, but since the 1986 implementation of the “Renovation” or Doi Moi policy, which began dismantling the country’s socialist economy in favor of a market economy, the country has seen tremendous social changes. Some have been positive, such as an overall rise in living standards, while others have not, such as increased corruption, social inequality, regional tensions, and an HIV-AIDS epidemic. The Communist Party retains complete control over political life, but whether Vietnam will continue its socioeconomic development in a climate of peace and stability remains uncertain at the turn of the century.

Vietnam covers an area roughly the size of New Mexico, 127,243 square miles (329,560 square kilometers), and is located between 8 and 24 degrees latitude and 102 and 110 degrees longitude. It is bounded to the north by China, to the northeast and center by Laos, and to the southwest by Cambodia. Its coastline stretches 2,135 miles (3,444 kilometers) from its border with Cambodia on the Gulf of Thailand to its border with China. Vietnam’s borders have been a source of contention since 1975, most notably ownership disputes with China, Malaysia, the Philippines, Taiwan, and Malaysia over the Spratly Islands, and with China and Taiwan over the Paracel Islands.

There has been recent progress in resolving land border disputes with China and Cambodia. The Vietnamese divide their country into three cultural regions: the north (Bac Bo), the center (Trung Bo), and the south (Nam Bo), with the main cities of each region being Hanoi, Hue, and Ho Chi Minh City (formerly Saigon). Since 1976, Hanoi, the former capital of one of the country’s earliest dynasties, has served as the capital of the unified Vietnam.

Vietnam has a diverse range of agro-economic zones. These two Vietnam culture regions are dominated by the river deltas of Vietnam’s two great rivers, the Red River in the north and the Mekong in the south.

The mountainous Annamite Cordillera, which is home to the majority of the country’s fifty-four ethnic groups, defines salient. Many of these groups have unique adaptations to their environments. Hunting and gathering, slash and burn agriculture, and some irrigated rice agriculture are among their practices. Warfare, land scarcity, population surpluses, illegal logging, and migration of lowlanders to highland areas have all contributed to deforestation and environmental degradation in several mountain terrain.

Vietnamese is the dominant language, with an estimated 86.7 percent of the population speaking it. It is a tonal Mon-Khmer language with strong lexical Chinese influences. The six-toned dialect of the central Red River delta region, particularly around Hanoi, is considered the standard form of the language, but there are significant dialectical differences between regions in terms of the number of tones, accents, and vocabulary. In social life, dialectical differences are frequently used as important symbols of regional identity. Vietnamese is taught in schools throughout the country as the official language. Vietnamese governments have made significant progress in raising literacy rates since the 1940s, and approximately 90 percent of the adult population is literate.

The country’s elite mastered a variety of second languages during the twentieth century, including French, Russian, and English, with the latter being the most commonly learned second language today. Linguists estimate that the country is home to approximately 85 other languages from the Austro-Asian, Austronesian, Daic, Miao-Yiao, and Sino-Tibetan language families. These languages range from those spoken by large populations, such as Muong (767,000), Khmer (700,000), Nung (700,000), Tai Dam (over 500,000), and Chinese (500,000), to those spoken by only a few hundred people, such as O’Du, which is spoken by an estimated two hundred people. Many members of minority groups are bilingual, though not always with Vietnamese as their second language.

The Vietnamese government makes extensive use of a variety of symbols to represent the country. The flag, with its red background and centered, five-pointed gold star; a variety of red and gold stars; Ho Chi Minh’s image; and representations of workers and soldiers are among them. In public places, there are images and statues of the latter, who wear green pith helmets and carry weapons. Images of Ho adorn everything from currency to building posters to portraits of him that are commonly found hanging in northern Vietnamese homes. Ho was an outspoken supporter of national unity, referring to all Vietnamese as “children of one house.” Other prominent symbols include the patterns of seabirds and other figures found on Dong Son drums.

The Birth of a Nation:

Many Vietnamese archeologists and historians believe that the Vietnamese people’s origins can be reliably traced back to the fifth or sixth millennium B.C., when tribal groups inhabited the western Vietnam culture regions of the Red River delta. In 42 B.C.E., China designated the territory as its southern-most province and began direct rule over it, which was a watershed moment in the formation of Vietnamese identity. China would rule the region for nearly a thousand years, laying the groundwork for the caution and ambivalence that Vietnamese have felt toward their massive northern neighbor for centuries. In 938, the Vietnamese regained their independence.

Over the next thousand years, the country was ruled by a succession of Vietnamese dynasties, including the Ly, Tran, Le, and Vietnam’s final dynasty, the Nguyen (1802–1945). Despite being heavily influenced by China in terms of political epistemology and organizational structure, these dynasties helped to articulate the uniqueness of Vietnamese society, culture, and history. During this time, the “Movement South” (Nam Tien) began, in which the Vietnamese moved south from their Red River delta homeland and progressively vanquished southern and central Vietnam. They relocated two previously dominant  Vietnam culture groups, the Cham and Khmer, in the process.

National identity is a difficult and contentious topic. The Vietnamese language is one of the most fundamental components. Many Vietnamese are extremely proud of their language and its nuances. People value the ability to use the countless number of adages and proverbs enshrined in the language and enjoy the rich opportunities for wordplay that come from its tonal nature. Vietnamese people are also attached to their natural environment. The phrase “Vietnamese land” (dat Viet) encapsulates the idea that Vietnamese society and culture have an organic relationship with their environment, with its defining metaphors of mountains and rivers.

Another important aspect of national identity is the set of distinctive customs that Vietnamese people practice, such like weddings, funerals, and ancestor worship. These are subject to significant regional and historical variation, but there is a perceived core that many consider as distinctively Vietnamese, particularly family worship of patrilineal ancestors. Vietnamese food, with flavorings and preparation styles distinguishable from China and other Southeast Asian countries, defines the country and its people.